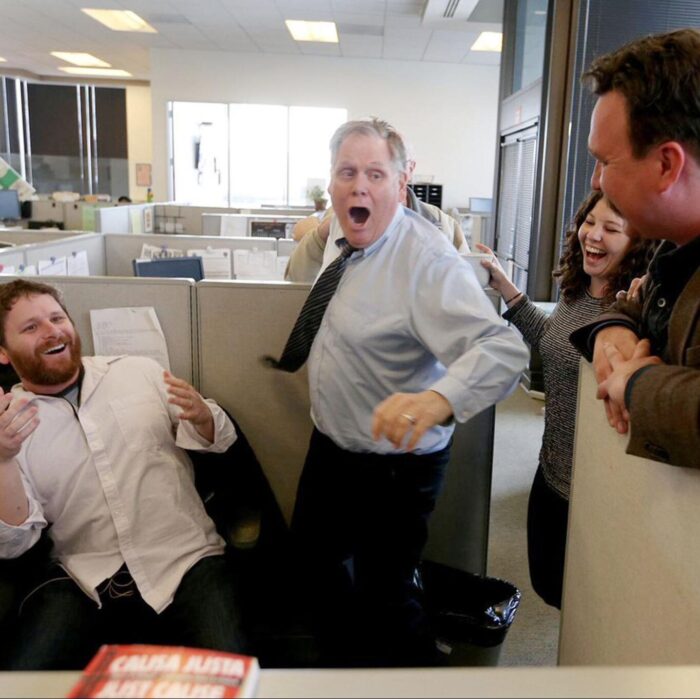 As we reflect on the first year of the Trump presidency, the constant has been his irresponsible and dangerous attacks on the press. An honest and diligent force for truth is more important than ever. So, one year in to this new administration, we’re reflecting on the ever-changing and yet evergreen role of the press. We sat down with local Pulitzer-winning reporters Dave DeBolt and Rob Salonga to hear their perspective on what it means to be a journalist during the Trump presidency.

The president generates a lot noise about the press. How has the current president changed the way you do your job?

Everything is politicized at this point, in ways that you wouldn’t expect. I’m a crime and public safety reporter, and everything I do now has some sort of Trump inflection on it. Whether it deals with immigration or suspects, the readership has become, without painting with a broad brush, some fringes of the readership have become emboldened.You can see it in the comments on stories. Internet comments have generally been awful since the internet was created, but it has become particularly emboldened in terms of how harsh it can be, how racist it’s gotten, how xenophobic its gotten in terms of the response I get to basic stories. There’s definitely been a tonal shift in the viewer responses I get. Anything that mentions immigration, anything that even touches [it], that has been catalyzed by the President’s election. Things that we would typically think are beyond the realm of politics are now infected with it, whether we like it or not.

I was in the newsroom in Downtown Oakland on election night and it was about 1am, and groups started forming on Broadway and you could tell there was going to be a protest. We’re in the newsroom, and the first instance of vandalism was someone throwing a rock through the newsroom window. And I went out there and said “What are you guys doing?” Our paper endorsed Clinton. I don’t know, there’s just anger. And, as Rob was saying, people are just reading more and more into things that five years ago would have been a straightforward news story. I do feel like as someone that covers the news I’ve noticed a lot more hate crimes in the Bay Area. I sometimes think maybe they went unnoticed before and we’re noticing them now or maybe there’s been some kinda shift where people just feel like they can do this stuff and get away with it, or say the vile things that politicians are saying on a daily basis.

I think it galvanized a lot of us to realize how important the job is now, even more than ever. Especially since, from the campaign until now, as a group, we’re called a bunch of liars, the enemy, and we’re being vilified for doing a job the same way we were doing it for a hundred something years. And, as we were saying earlier, there’s a lot of noise, and now it’s on us to cut through that and dilute the “fake news” stuff with our work. Our work matters now more than ever. And while I talked about certain fringes of the readership becoming emboldened to become more hateful or more extreme, I also think there’s been an analogous shift in an increasing appreciation for actual factual reporting, too. We have to paint ourselves as a contrast to what’s out there by saying ‘we report what’s actually happening’ which is a little insane when you think about it. We’re seen as the fringe now, politically, by just reporting things that are happening.

I saw that the president tweeted that when the media says “sources say, etc.” and they don’t name the source, that everybody should remember that that source is often made up and doesn’t exist. I wonder if you could comment on how you approach sources who tell you something on background or don’t want to be named. From both an ethical standpoint and how it would impact your careers, what would happen if you were found out to “make up a source up” as the President has suggested.

I mean, yeah if anyone even thinks about making up a source they shouldn’t be in journalism, period. There’s no threshold for that. Our word is our only currency, our credibility is our only currency, and the second that’s gone, we’re done as  journalists. As a journalist, if we’re found to have fabricated information then that sacred trust that we have with a reader is done, and its irreparable. The threshold that I operate under when it comes to an anonymous source is that people shouldn’t suffer for telling the truth. If i’m a journalist and I get a great story because of a source, the risk cannot be 100% on the part of the source. That risk has to be shared, because that’s not fair. So it’s a negotiation and an agreement. And its an agreement based on truth because granting anonymity, which again, we do judiciously, is predicated on them telling us the truth. If we find out that they willingly lied to us, the anonymity goes out the window, and when I have to explain why I reported this, anonymity is gone. So it’s a mutually entered agreement, that as long as you’re telling me the truth, I’ll protect you. In my field of crime reporting, you shouldn’t be putting yourself in danger because you decided to say something about something going on in your neighborhood or whistleblowing on the police or anything along those lines because the stakes are high in a lot of these cases. We don’t just take anonymous phone calls or meet strangers in parking garages, whenever we have a source. We vet their credibility. We know who they are.

Like Rob said, these aren’t people we’ve just met today. We’ve known them for years, we trust them or there’s an established trust, and they’re on the record sources sometimes, but sometimes they can’t talk about stuff. And I’d imagine, with Trump right now, these are people within the White House who are leaking information to the New York Times, and I have to think that they’ve spent some time establishing that trust for months if not years.

Our obligation is not to the government. Our obligation is to our readers and to the people of this country, and if it’s important enough for them to have this information then we will find a way to get it to them. That’s our job, that’s what we agreed to, that’s what we’ve signed on to do. And we try to be judicious because every time you use an anonymous source you’re asking the reader, ‘trust me’ this is a real person, real information, that’s not something I’d do lightly at all. I’d go through a lot of hoops to make sure the credibility is solid, but at the end of the day our job is to get this information out.

Rob and Dave’s responses have been edited slightly for clarity and length.